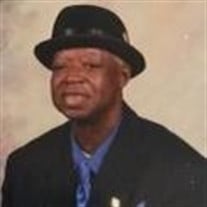 Bernard Turner Sr. was Born on March 16th, 1941, in Hayneville, Alabama to Parents Fannie Wright & Eddie Turner- Raised by Stepmother: Evelena Turner. After his Birth his Mother Fannie Wright passed away, leaving his 3 sisters to care for him. During his infancy, his father remarried Evelena Turner and moved her and her daughter Clara Bell along with his 7 siblings to Eclectic, Alabama. Bernard attended grade school at Beulah Baptist Church School in 1946 in Eclectic, Alabama and transferred to Chapel Public School. He attended school until 1957, ending at his 6th grade year. During this time, he had to transfer to Tallassee Public School for higher education, but his Father Eddie Turner couldn't commute with him to school and run a Business as a share cropper/farmer. His father decided it was best to withdraw him from school and become a sharecropper/Farmer and work along with his brothers at the age of 12. Bernard started training and working as a Carpenter until he was 17. As time progressed, he became a Master Carpenter. In his 20's and 30’s, he traveled to various states and worked as a Carpenter/Builder. Many would not believe today he had only a 6th grade education. In 1971, while in his 30's he moved to Florida, with his wife Joan Turner and children Corey and Ronda. They remained married for 50 years. In 1977, he began to work for Apopka High School and was employed there for many years. In 1980 he came to Jesus under Pastor Mary Hodge in Apopka, Florida. As he walked with God, he started a group "The Soul Searchers" and became a member/deacon of 8th Street Church Of God In Christ in Apopka, Florida, under Pastor Pollard in 1981. 1985, he moved his membership to Community Holy Temple in Apopka, Florida under the leadership of Bishop Erlene Wagner, where he continued as a faithful Deacon and Sunday School Teacher. 1987 he prayed that God Bless his children to play music and sing and God answered him. From there he started his Family Group the Turner Family. Thru the years they sung from city to city and was offered a recording contract from Grand Olé Opera recording Label. As a Great Father, he declined the contract so his children could continue their education. The family continued to sing until 1996. In 2002, The Turner Family reunited and evolved into the Turner Brothers. In 2003, he became Pastor of First-Born Church Of God in Apopka, Florida under Bishop Ligon. He discontinued as Pastor due to sickness in 2005. Until his final day he remained a faithful member of Community Holy Temple Apopka, Florida under Pastor Henry Bolden. His Legacy continues thru his Sons, Daughters, and Grand Kids. Bernard was preceded in death by his Parents Fannie Wright and Eddie Turner; Step Mother, Evelena Turner; Sisters: Bessie Turner, Ann Turner, and Caroline Turner; Brothers: John Henry Turner, Frank Turner, Tommy Turner, Robert Turner, Felix Turner, Reed Turner, and Mack Turner. He leaves to cherish his precious memories: His devoted and Loving Wife for 50 years, Joan Turner - Apopka, FL; Children: Felecia Williams - Ohio, Billy Ray Daniels -Tallassee, AL Michelle Austin - Kankakee, Illinois Ricky Austin - Kankakee, Illinois, Tammy Smith (John) - Wetumpka, AL, Corey Davis Tallassee, Alabama (Rhondale Turner, Derrick Turner(Melissa), Patrick Turner (Sabrina) , Bernard "Bam" Turner Jr (Felicia), Donathan" Norris" Turner Apopka, FL); God Sons: Quantary & Tanaris Roberson (Robina); 41 Grandchildren, 50 Great Grandchildren, nieces, nephews, and a host other loving relatives and friends.

Bernard Turner Sr. was Born on March 16th, 1941, in Hayneville, Alabama to Parents Fannie Wright & Eddie Turner- Raised by Stepmother: Evelena Turner. After his Birth his Mother Fannie Wright passed away, leaving his 3 sisters to care for him.... View Obituary & Service Information

The family of Bernard Turner, Sr. created this Life Tributes page to make it easy to share your memories.

Send flowers to the Turner, family.