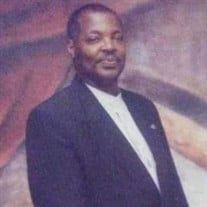 Bernard Macon, Sr. (Barney) was born March 13, 1959 in Apopka, Florida to Cordie Mae Tooks and Lee Edward Macon (Hilda). Bernard lived in Apopka, Florida before moving to Miami, Florida. He attended school in Miami and graduated from Miami Carol City Senior High School with the class of 1977. Bernard was employed at the Village on the Green/Life Care Center. Bernard loved going to Church, having Bible Study, singing, helping others, spending time with his grandchildren and all his family. Bernard was a hard working man he will be truly missed by many. He want family, love ones and friends to know that the time he spent on earth he enjoyed. He played and prayed with many of you, now the fun on earth is over. The Lord has called His servant home. His work on earth is done. He leaves with all of us II Timothy 4:6-8, Philippians 1:19-20. Bernard was preceded in death by his mother, Cordie Mae Tooks and father, Lee Edward Macon. He leaves to cherish precious memories to his stepmother: Hilda Macon; children: Amanda Macon of Orlando, Florida and Bernard Macon, Jr. of Belle Glade, Florida; siblings: James Macon (Peggy), Jeanette Pierre, Barbara M. Dancy, Mary Ward, Duckley Macon and Shauna Perkins, all of Orlando, Florida; in-laws: Cynthia Orr (John), Ethelena Nevins, Henry L. Orr and Raymond Williams, all of Apopka, Florida; three grandchildren, Deanna Patrick, Anasia McIntosh and Tyshawn Macon; two aunts, Mary Alice Macon and Mary Charles Brown; one uncle; six nieces; seven nephews, a host of cousins other relatives and sorrowing friends

The family of Bernard Macon, Sr. created this Life Tributes page to make it easy to share your memories.

Send flowers to the Macon, family.