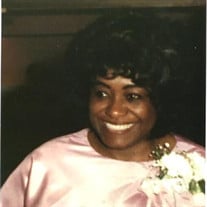 Arthuree (affectionately known by all as Audrey) was born May 3, 1936 to Nathan and Rosa Mae Connelly in Allendale County, South Carolina. She enjoyed her early childhood rearing in Okahumpka, Florida and relished her teen years and received her primary education in Jacksonville, Florida prior to attending college. She received her secondary education and did graduate studies at Columbia State University and Claflin University in South Carolina where she received a master’s degree in Education and Medical Technology. She was employed as an educator and taught Chemistry for 42 years at Lakewood High School in Cleveland, Ohio while working as a Registered Medical Technologist in Forensics at the Cleveland Clinic in her spare time. She treasured her volunteer service as an animal curator at the Cleveland Zoo. Her hobbies included gardening and nourishing anything to make it grow, baking (from scratch), sewing, writing, dissecting, and exploring reptiles and mammal creatures and motivating others to reach beyond their limits. She was extremely influential in inspiring her baby sister, Ethel Mae to become a High School Teacher just as she was. After serving forty years in the Ohio School System; Audrey retired to Florida where she has received untiring, dedicated, and constant loving attentive care from her baby sister, Ethel Mae for over 20 years until the Lord called her home. She was a loyal and liberal member of the House of God Church in Mt. Dora, Florida under the pastorate of (State Elder) Ethel Mae Badger. Audrey was preceded in death by her husband: Leonard Colbert; her mother: Rosa Mae and her father: Nathan Connelly; six brothers: Roosevelt, Nathan Jr., Johnnie, Booker Thomas, Michael and Harry and two sisters: Barbara Jean and Cherrie Ann. Audrey leaves to cherish her precious memories: two sons, William James Pompey, II (aka Rick) of Baltimore, Maryland and Roderick Sterling Pompey, Sr. (Clarissa) of Gurney, Illinois; four grandchildren: Roderick Sterling Pompey, Jr., Corinne Pompey, Meagan Pompey and Raquel Pompey; three sisters: Willie Mae Anderson of Ft. Pierce, Florida, Bessie Brinson of Leesburg, Florida and Ethel Badger (Robert) of Mt. Dora, Florida; four brothers: Samuel Lee Connelly (Mandy) of Orlando, Florida, Marion Jerome Connelly of Tampa, Florida, Clifton Morrell of Tavares, Florida and Jerry Morrell (Wanda) of Atlanta, Georgia; a host of nieces, nephew, cousins, other relatives and fond friends.

Arthuree (affectionately known by all as Audrey) was born May 3, 1936 to Nathan and Rosa Mae Connelly in Allendale County, South Carolina. She enjoyed her early childhood rearing in Okahumpka, Florida and relished her teen years and received... View Obituary & Service Information

The family of Arthuree C. Pompey created this Life Tributes page to make it easy to share your memories.

Arthuree (affectionately known by all as Audrey) was born May...

Send flowers to the Pompey family.