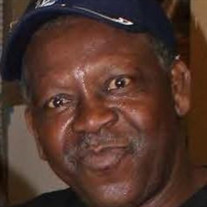 Birthed from the beautiful union of Mr. Emmanuel (deceased) and Merletha Rolle was a lovely baby boy. He was the fourth child of eight siblings. He was the father of Amud Rolle, Jr.(deceased) and daughter Kimberly Edwards. His father Emmanuel and brother Phares and son Amud, Jr., proceeded him in death. He leaves to cherish his memories his daughter Kimberly Edwards, mother, Merletha Rolle, brothers Samuel Rolle, Euckial Rolle, Kenneth Rolle and Frederick Rolle; sisters Veraleane Rolle-Watson and Gelita Rolle. Four loving grandchildren Isaac Richardson, Jr., Briana Edwards, Ariel Edwards, and Corey Edwards, Jr. Nephews: Michael Rolle, Donte Marshall, Josiah Greer and King Smith. Nieces: Whitney Rolle, Fabinia Watson, Lilliana Trong, and London Marshall. Amud received his primary education from Webster Elementary, Maitland Middle School and Winter Park Jr. Hight. He was a proud graduate of Winter Park Sr. High, Class of 1974. Amud loved football, and was an active football player for Winter Park Wildcats. At home he received his biblical training from his father, and mother; he attended his father church on a regular basis. Depsite his challenges, Amud, loved God and received Christ as his personal savior as a young man. He believed in God first, then family. As a young man, Amud, married his high school sweetheart, and to this union a son and daughter was born. He had a special love and affection for all children and everyone could attest that they loved him in return. All his nieces and nephews loved him with the upmost passion. He will truly be missed by the all. Amud always sought gainful employment. As scripture says "by the sweat of your brow you shall eat bread". He had avid masonry skills and was no stranger to hard work. A hard worker, Amud had no limits on the kinds of jobs he would do, whether it was cleaning yards, painting, roofing, or even busing tables. He was very sincere and took pride in doing his jobs to the best of his abilities. Hard work was just a pleasure for him. On Friday, March 19, 2021 in the early hours of the morning, God, called Amud Home to Glory. He fought a good fight, and he has gain his wings. Through he will be greatly missed it "We are confident, I say, and willing rather to be absent from the body and to be present with the lord" 2 Corinthians 5:8

Birthed from the beautiful union of Mr. Emmanuel (deceased) and Merletha Rolle was a lovely baby boy. He was the fourth child of eight siblings. He was the father of Amud Rolle, Jr.(deceased) and daughter Kimberly Edwards. His father Emmanuel... View Obituary & Service Information

The family of Amud Rolle, Sr. created this Life Tributes page to make it easy to share your memories.

Birthed from the beautiful union of Mr. Emmanuel (deceased) and...

Send flowers to the Rolle, family.