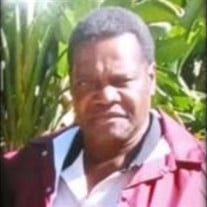 Allen Taylor, Jr. was born on May 8, 1945 in Leary, Georgia to Allen Taylor, Sr. and Dollie Murphy Taylor. At an early age, Allen and his family moved to Mt. Dora, Florida where he was raised with his older siblings. Allen attended the Lake... View Obituary & Service Information

The family of Allen J. Taylor, Jr. created this Life Tributes page to make it easy to share your memories.