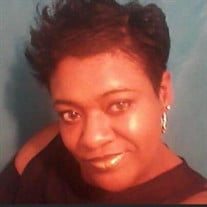 Alicia Shante Clear, affectionately called “Shante”, was born in Brooklyn, New York on March 5, 1978 to parents Halvor Alexander Johannes and Jacquelene Barrett. Alicia, my daughter, my friend and my child was the youngest out of five children. (Theodore, Troy, Crystal, Andrea, and then Shante) The early years of her life were spent in both Eustis and Orlando, Florida until we made the move as a family to Tacoma, Washington. There, we settled down for years and made it home. It was in Tacoma, that she began a family of her own, giving birth to her three beautiful children, Daivonna, Benjamin and Jasmine. She graduated from Clover Park College where she studied accounting. Shante made lots of friends who loved her dearly from Tavares to Tacoma and wherever she resided. She knew how to make you smile and could tell a story that will have you laughing. You knew when to mess with her and when to leave her alone (smile), but it was all in love. Shante is going to be truly missed as she lived life to the fullest and did it with much love. She was preceded in death by her father, Halvor Alexander Johannes. Shante leaves her precious memories to her Mother, Jacquelene of Tavares, Florida; her precious, darling Children: Daivonna Clear of Tavares, Florida, Benjamin Goodman of Renton, Washington, and Jasmine Clear of Tavares, Florida; Sister, Andrea Barrett of Tacoma, Washington; Uncle, Ervin James Barrett of Orlando, Florida, Aunts: Harriet Chambers of Renton, Washington and Louisa Pindal of Weirsdale, Florida; Nephew, Shaun Barrett of Tacoma, Washington, Nieces: Shayvonne Sanders of Tacoma, Washington and Shaphari Bolden of Tacoma, Washington; Great Nephew, Jhayce Sanders of Tacoma Washington; and a host of cousins, other loving relatives and sorrowing friends.

Alicia Shante Clear, affectionately called &#8220;Shante&#8221;, was born in Brooklyn, New York on March 5, 1978 to parents Halvor Alexander Johannes and Jacquelene Barrett. Alicia, my daughter, my friend and my child was the youngest out of... View Obituary & Service Information

The family of Alicia Shante Clear created this Life Tributes page to make it easy to share your memories.

Send flowers to the Clear family.