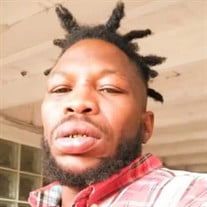 Alfred James Ponder, III, also known as "Fred" was born June 3, 1983 to the late Alfred James "AJ." Ponder and Swazine Lanette Ware. He was a curious, intelligent, and active child who excelled in both athletics and academics. He graduated from Edgewater High School. Alfred took great pride in his ability to challenge anyone on any topic but most of all being a walking dictionary. Alfred enjoyed life to the fullest, his wealth of knowledge was unbelievable. He was a prank-ster. His greatest prank (to him) was having to find his shoe on Sunday morning, when it was time to go to Shiloh Missionary Baptist Church where his grandfather was pastor. Alfred was very active in the Youth Department, especially the Youth Choir. His favorite song to lead was "Who's on the Lord's side". His memory of love and laughter will forever be cherished by those he leaves behind: His two daughters, Alaya & Lyrie; a loving and caring mother, Swazine McRae; a treasured grandmother, Gloria Ware; an awesome big brother, Jarvis O. Ware (Tonya); a unique baby brother, Dante'; like a daughter, Nyesha; seven aunts, Shari, Renaye, Deenie, Eliza, Eunice, Patricia, Essie; four uncles, Greg, Nathaniel, Milton, and Ricky; and a host of other cousins and sorrowing relatives and friends. Alfred was preceded in death by his maternal grandfather, Pastor Samuel Ware Jr., paternal grandparents, Mr. Alfred Ponder I, Mrs. Rachel Ponder, and his father, Alfred Ponder II. A Symopsis of My Grandon Between the innocence of infancy and the dignity of manhood we find a delighted fellow called Alfred. Boys come in all assorted sizes, weight and colors, but all boys have the same creed and aspiration to enjoy every second of every minute of everyday until its time to get his bath, which he hated immensely because he was never dirty. He would procrastinate forever trying to convince me that he really didn't need a bath. Boys are found everywhere on top of, underneath, inside of, climbing on, swinging from, running around or jumping on. Grandmothers love them, little girls hate them, older sisters and brothers tolerate them, adults ignore them and heaven protects them. Alfred was extremely smart. He would love to challenge anyone on any topic, but most of all his words, his claim to fame was to challenge me (his grandmother) with words, which he was successful once, genius (he thought). He was always a prankster and loved everything but Sunday School and church. Every Sunday he had to find one missing shoe. He loved ice cream, cars, trains, big trucks, Christmas, Saturday's, but church and Sunday School, not so much.

Alfred James Ponder, III, also known as "Fred" was born June 3, 1983 to the late Alfred James "AJ." Ponder and Swazine Lanette Ware. He was a curious, intelligent, and active child who excelled in both athletics and academics. He graduated from... View Obituary & Service Information

The family of Alfred James Ponder, III created this Life Tributes page to make it easy to share your memories.