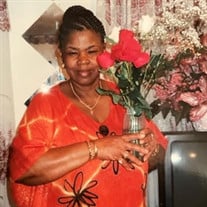 Alberta Davidson Caines born on October 31, 1943, to Rhoda Wilson and Sabian Davidson in the wonderful, beautiful village of Lucy Vale Speyside Tobago. Alberta was one of the 32 fruit of sabian Davidson, on the branch of Rhonda Wilson she was number 7. At the death of her parents she moved to Sangre Grande Trinidad, where she grew up with her brother Elchido Davidson, but after a few years, she moved back to Tobago where she started to build her life as a young woman. In the lovely village of Speyside, she walked a humble peaceful life, as a Christian and devoted servant of God under the leadership of Pastor McPherson. She worked as a maid at Blue Waters Inn. It was while working at Blue Waters Inn she was offered the opportunity by her managers to move to Puerto Rico with them to look after their kids. It was a big decision to make, which involved consultation with her other siblings, they encouraged her to go. From Puerto Rico she migrated to St. Thomas, there she made a separation from Blue Waters management and started working at Pineapple Hotel. She attended the church of God in St. Thomas. It was a mixture of the pineapple and the blood of Jesus, that cause the sparkle to flow in her eyes when she met her boyfriend who turned later after 2 months to be her husband, they were married June 3, 1971. Out of that 50 years marriage, there was joy, love, tears, but most of all a relationship with God and her 5 beautiful kids. How can we describe our mother, everyone said a people person, highly favored woman, an angelic star, a prayer warrior, reader, bible searcher, a prophetic woman, shepherd of the sheep and beautiful human being. Alberta was preceded in death by one son, Curtis Caines. Alberta Davidson Caines leaves to cherish precious memories to her devoted spouse: James O. Caines of Orlando, Florida; parents: Rhonda Wilson and Sabian Davidson, both of Speysida Tobago; daughters: Debra Phillip of New York, USA and Natashia Caines-Jackson of Orlando, Florida; sons: Dwayne Caines of Orlando, Florida and Purcelle Davidson of Birmingham, London; sisters: Hilda Bernard, Catherine Cordrer, Edith Davidson, Edris Davidson and Aga Davidson, all of Spayside, Tobago, Maltina Warrick of St. James, Trinidad, Elizabeth Scott of Arina, Trinidad and Marie Davidson of New York, USA; brothers: Alan, Richmond, Ralf, Leeburt Davidson, all of Speysid, Tobago; six grandchildren: Jenelle, Janay, Reanne, Osias, Maliachi and Joshiah; adopted grandchildren: Ashley, Karizma and plenty others; nephews: Godfrey, Ken, Eddison and Sheldon; nieces: Suzette, Dora, Wendy, Bernadine, Rhonda, Yvonne, Julie, Doloris, Karen; a host of other relatives and sorrowing friends.

Alberta Davidson Caines born on October 31, 1943, to Rhoda Wilson and Sabian Davidson in the wonderful, beautiful village of Lucy Vale Speyside Tobago. Alberta was one of the 32 fruit of sabian Davidson, on the branch of Rhonda Wilson she was... View Obituary & Service Information

The family of Albertha Clyden Davidson Caines created this Life Tributes page to make it easy to share your memories.

Send flowers to the Caines family.