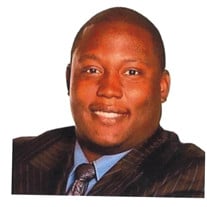 u·ni·ty 1. The state of being united or joined as a whole. “Behold, how good and how pleasant it is for brethren to dwell together in unity!” ~ Psalms 133:1 United in Family Adrian was born on February 10, 1979, to his mother, Terry Davis and Jessie Manley, Jr. He was raised by his mother and grandparents, James and Ocrietto Anderson. They knew at an early age that Adrian was an extraordinary child. Always well-mannered, anyone who met Adrian knew he would go far in life. At the age of eight, Adrian accepted the role of “big brother” when Terry welcomed his new little sister “Sherry” into the family. Two years later, Adrian expanded his heart even more as he welcomed his stepfather, Tommie Davis. United in Preparation Anyone who met Adrian knew he was destined for greatness, and Adrian knew it would take preparation, dedication and determination to make it happen. After graduating from South Lake High School in 1997, Adrian proudly represented his family as a first generation college student at the University of Florida (UF) in Gainesville. Not only did he attend, but he left his footprint on the campus by earning four degrees: Bachelor of Health Science (May 2001), Master of Education in Marriage & Family Therapy (December 2003), Specialist in Education (December 2003), and a Doctorate of Philosophy in Counselor Education (December 2006). United in Christ At the early age of four, Adrian accepted Jesus Christ as his Lord and Savior. He was baptized and filled with the Holy Ghost and desired only to please the Lord. He was determined not to be influenced by any opposition; therefore, he immersed himself in the church. He could be found participating in the Church of God in Christ (COGIC) Sunshine Band, Purity Band, Sunday School and any church service taking place. He loved God and church and he made sure everyone knew it! United in Marriage Little did Adrian know, January 13, 2002, would be the day he would meet the love of his life, Katrina Collier at Williams Temple COGIC in Gainesville, FL. Katrina was invited to church by a friend and began to frequently attend the church and the Bible Study class where Adrian happened to be the teacher. Adrian was very interested in pursuing a relationship with Katrina, but at that time she was not interested and only saw him as “the Bible Study teacher.” What began as friendly hanging out during the summer of 2002 turned into something greater. The two officially began dating on July 15, 2002, and later, the college sweethearts united in holy matrimony on February 26, 2005. They welcomed their first son, Adrian Jr. (AJ) on April 2, 2009, followed by the birth of Joshua on October 6, 2011, and Noah on June 12, 2015. Adrian loved his family dearly and often reminded everyone that Katrina, AJ, Joshua and Noah were his greatest accomplishments. He showed his love for them not just in words but in action. He was a very present husband and father and he spoiled them every day. 1979 - 2021 The Life, The Legacy, The Labor of Dr. Adrian T. Manley, Sr. Continued… United in Kingdom Work He was ordained as an Elder in the Church of God in Christ under the recommendation of the late Superintendent Dr. D.R. Williams in August 2008. In January 2014, Dr. Manley heard and adhered to the Lord’s calling to begin Christ Centered Fellowship in Clermont, FL, where he was a dedicated and committed pastor to his congregation and community. Pastor Manley faithfully served churches locally and throughout the state. He was often called upon to serve as worship leader, teach Bible study and serve in the capacity of Minister of Music. He labored in Prison Ministry, Street Ministry, the South Lake Male Chorus, the South Lake Unity Choir and anywhere else there was a need. Pastor Manley represented Christ well on several boards including The Fellowship of Christian Athletes (FCA), The United Way, South Lake Black Achievers and South Lake Association of Pastors (SLAP). United in Vocation Dr. Manley spent the majority of his professional career in Higher Education. He worked as a Graduate Instructor at The University of Florida in the Counseling Education Department, a Counseling Specialist and Adjunct Instructor at Santa Fe College, a Tenured Faculty Counselor at Valencia College and Associate Professor in Counseling Education at Southeastern University. Dr. Manley’s additional career and professional accolades includes: • Private Practice Therapist and Owner/Operator of South Lake Family Counseling Services • Licensed Marriage and Family Therapist with the State of Florida • State Registered Supervisor for Marriage and Family Therapy and Mental Health Counseling • Certified EFT (Emotion Focused Therapy) Therapist • Author of The Little Book of Wisdom for Dealing with Frustration: Godly Wisdom for Everyday Life • Public Speaker and Workshop Facilitator United in Glory Dr. Adrian T. Manley, Sr. lived his entire life serving the Lord and on August 26, 2021, he submitted himself to the will of the Father and transitioned from this life of mortality, receiving his reward for his unwavering faith and work. United with Precious Memories He was preceded in death by his grandfathers, James Anderson and Isaac Lamar. A lifetime of love and precious memories will forever be cherished by his beloved Wife and Best Friend Katrina; Sons and Pride and Joy: Adrian, Jr. “AJ”, Joshua, and Noah; Mother and Stepfather: Terry and Tommie Davis of Mascotte, FL; Grandparents: Ocrietto “Bay” Anderson, Jessie and Betty Manley, Sr. of Groveland, FL; Sister, Sherry Davis of Mascotte, FL; Godmother, Patricia Wilson of Daytona Beach, FL; Special Aunt, Betty Curry of Groveland, FL; Father and Mother-in-Law: James and Alva Collier, Jr.; Sister-in-Law, Tameka Collier of Gainesville, FL; Close Nephews: James, Caleb, Nathan, and Nicholas Walden, all of Gainesville, FL; Godchildren: Elijah and Ethan Mitchell of Mascotte, FL, Oliana Herbert of Port Saint Lucie, FL, Charles Hunt Jr., and Carlee Hunt, both of Gainesville, FL; Christ Centered Fellowship church family; and a host of uncles, aunts, nephews, nieces, cousins, and sorrowing friends & colleagues.

The family of Dr. Adrian T. Manley, Sr. created this Life Tributes page to make it easy to share your memories.

Send flowers to the Manley, family.