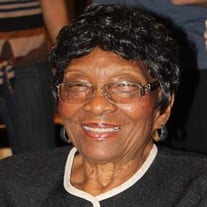 To view the service for Addie Lee Mitchell's live stream please use the link below: www.facebook.com/ZandersFuneralLIVE Addie Lee Mitchell, affectionately known as “Big Ma” or “Big Mama”, was born January 9, 1933 in Opelika, Alabama to parents Asbury Harris and Everlena Patrick Harris. She moved to Oakland, Florida in her early twenties where she met her forever sister-friend, Eddie R. Jackson. She also met James Mitchell and they married in 1955. Addie was the eldest of her six siblings, therefore she was unable to attend school during her primary years due to having to work and help support the family. She was a “Go Getter” and was extremely motivated. With a high school-aged teenager by her side, she attended night school and graduated along with her one and only daughter, Patricia, in 1970 from Charles R. Drew High School. Addie was very resourceful with several abilities. She served in the restaurant and hospitality industry for 23 years, having excelled in her career at both Sunland Hospital and Walt Disney World. Addie was known to spread love and joy through cooking, baking and serving others. Everyone had their favorite dish, but her specialties were banana pudding, bread pudding and her famous pound cake. Addie attended Mt. Zion A.M.E. Church in Oakland, Florida and served faithfully on the Minnie Holmes Usher Ministry, Choir, WMS (Women’s Ministry Society) and the Pastor’s Aide. She also served as Treasurer of the County Wide Charity Club (CWCC) until her health began to fail. Her beautiful smile always lit up the room. She was everyone’s “Big Mama”. She will forever be remembered as an amazing Mother, Grandmother, Sister and Loyal friend. Addie Lee Mitchell was preceded in death by her Husband: James Mitchell; Parents: Asbury Harris and Everlena Patrick Harris; Brothers: John Henry Harris, AJ Harris and Oralee Harris; Sisters: Jossie Mae Griffin and Jessie Mae Hughley. Left to cherish her memory...Daughter, Patricia L. Williams (Sidney) of Oakland, Florida; Sister: Eddie R. Jackson of Oakland, Florida; Grandchildren: LaTonya Jackson (Ulysses) and Temica Williams, both of Oakland, Florida; Great Grandchildren: James Smith, Latrelle Smith and Le’Nya Smith, all of Oakland, Florida; Great-great Grandchildren: James M. Smith of Orlando, Florida and Marquese A. Smith of Winter Garden, Florida; Special Nieces: Brandi Crowder and Karen Jackson, both of Oakland, Florida; and a host of Nieces, Nephews, other loving relatives.

The family of Addie Lee Mitchell created this Life Tributes page to make it easy to share your memories.

Send flowers to the Mitchell family.