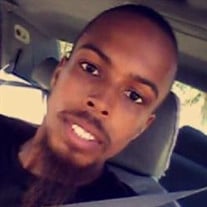 Adam McLin Anderson, the second of three children born to Robert & Michelle McLin Anderson, began his life journey in Atlanta, Georgia on October 31, 1995. By way of schools and youth athletics (track & field, baseball, basketball, karate) and later amateur boxing, Adam was able to cultivate the love and respect of his peers, his teachers, and his many coaches. Adam was an avid outdoorsman, who enjoyed cycling, fish and any activity that involved working with his hands particularly gardening or landscaping. Since early childhood he's been fiercely protective, and relentlessly hardworking. Children gravitated towards him constantly, likely because of his easy smile, down-to-earth nature and a genuinely gentle soul. His great sense of humor and dry wit, coupled with his ability to debate anyone on any subject when called upon, prompted the respect and admiration of many who met him. He kept to himself most often and was a self-taught keyboardist and skilled chess player. Devastated by Adam's sudden departure are his parents Robert and Michelle McLin Anderson; sister, Pyper; brother, Aedan; brother DeMeko (Lavette), San Diego, CA; very young sons: Amaris Amahn Anderson, Ezekiel Malcolm Anderson, & Xavier Ali Anderson; one uncle, Roger; 4 aunts: Lavonia, Edna, Greselda, and Julia; nephews: Chase, Caiden, DeMeko, Jr.; and countless extended family, co-workers, friends, and acquaintances.

The family of Adam McLin Anderson created this Life Tributes page to make it easy to share your memories.

Send flowers to the Anderson family.