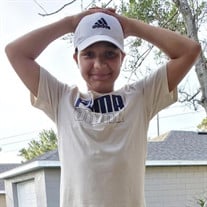 Aaron Jeffery Gerard Wade was born on April 26, 2007, in Altamonte Springs, Florida to parents Eric and Kellie Wade. He attended school at Bridgewater Middle School in Winter Garden, Florida. When he made his debut into this world, Aaron completed our family. He was adored by his parents and big brothers Dominique Peterson and Eric (EJ) Wade from day one. From the very beginning Aaron could be found around Winter Park stealing everyone’s heart with his infectious smile from the Winter Park Pop Warner football fields where his brothers played and dad coached; to Killarney Elementary School where his mom volunteered with the PTSO and his brothers attended school. Eventually when he turned 5, he joined his brothers on the football field with the Winter Park Tigers and as a Killarney Shamrock. In 2013, Aaron’s parents moved the family to Orlando where he attended Lockhart Elementary School starting his 1st grade year. During this time the family continued to attend Church In the Son, where at the age of eight Aaron accepted Jesus into his heart and made the decision to be baptized saying “ I want to be baptized so I can have a new life with Jesus.” While attending Lockhart Elementary School, he enjoyed participating in activities such as The Good News Club hosted by Lockhart Baptist Church on Wednesday afternoons, chorus, and the art club. Aaron excelled academically scoring all 5’s on the Florida State Assessments in 4th grade and qualifying for the gifted program. During his 5th grade year he enjoyed the honor of being a safety patrol. As he prepared to transition into middle school, he loved attending The Link on Sunday mornings, while the rest of the family members attended the church service at Church In the Son. Then in 2018, Aaron moved on to join his mother at Bridgewater Middle School as a Bobcat. He continued to take all advanced and gifted classes, receiving an invitation to join the Calculus Project Program in which he participated for two summers in a preview of the Algebra 1 and Geometry courses he would take during the school year. After school Aaron participated in the Bridgewater Believers Club, YMCA afterschool program, or most often he could be found helping the school custodian Mr. Josh Kennedy. Aaron loved to play games, watch videos, and talk to his friends on the phone or through the x-box. He loved being with his brothers and trying to imitate them any way he could. Aaron was always joking around and trying to shock people and make them laugh. This was the case even on the day of his departure from this world as he photo bombed pictures his mom tried to take and joked as he helped her cook dinner that night. Aaron will truly be missed by all who knew him. He leaves to rejoice his homegoing, his dad and mom, Eric and Kellie Wade, Orlando, FL; brothers, Dominique Peterson, Cocoa, FL; Eric (EJ) Wade, Orlando, FL; great-grandparent, Verla Westerbeke, Cocoa, FL; grandparents, Rosalie T. Pitts, Winter Park, FL; Gary and Kay McNutt Cocoa, FL; uncle and aunts, Earl and Meisha Wade, Gainesville, FL; Kimberly McNutt, Indiana, PA; cousins, Kailey Wade, Gainesville, FL; Kamille Wade, Memphis, TN; Sierra MacNaughton, Palm Bay, FL; Sophia Elmasian, Melbourne, FL; Kennedy Wade, Gainesville, FL; Justin Elmasian, Melbourne, FL; and a host of other loving relatives and friends who will miss him greatly.

Aaron Jeffery Gerard Wade was born on April 26, 2007, in Altamonte Springs, Florida to parents Eric and Kellie Wade. He attended school at Bridgewater Middle School in Winter Garden, Florida. When he made his debut into this world, Aaron completed... View Obituary & Service Information

The family of Aaron Jeffery Gerard Wade created this Life Tributes page to make it easy to share your memories.

Send flowers to the Wade family.